Goodwin Procter has seen its top line roughly double from $678 million to $1.5 billion over the last 10 years, thanks in large part to a playbook that focuses on the intersection of technology and capital.

The firm developed what it calls its “convergence strategy” roughly a decade ago in the wake of the global financial crisis that sought to capture work from the technological expansion happening across industries, whether that be a new biotech startup or buyout giant the Carlyle Group.

Goodwin started preparing a decade ago for tech’s dominance across sectors by hiring more lawyers to handle work for tech-heavy companies, as well as in two closely related areas—private equity, which has since moved to invest heavily in technology, and life sciences, which is now increasingly using new technologies in its new products and services.

The firm has also invested in opening offices in new areas where tech-oriented companies, often startups, have set up shop.

The convergence play has proved successful despite the coronavirus pandemic, and perhaps even benefited from the virus’s acceleration of market trends like increased remote work and a focus on biotech investment.

Over the last year the firm’s private equity, technology, and life sciences practices’ revenues have grown 16%, 11%, and 41% respectively, and Goodwin has done big deals for clients like Moderna Inc., MyoKardia Inc., and Slack Technologies Inc.

Many Big Law firms are just now executing a strategy shift like Goodwin’s to capture business advising tech-enabled companies and their investors.

“As they look to scale their businesses and diversify, many [firms] see an opportunity to not just focus on serving pure tech companies, but instead serve companies across industries whose businesses are evolving from tech-driven innovation,” said Kent Zimmermann, a consultant for law firm management at The Zeughauser Group.

The seeds of Goodwin’s convergence strategy were planted nearly two decades ago, Bettencourt said, as it shifted to an industry focus around five groups rather than traditional practice areas. The approach ultimately allowed the firm to more easily carry out convergence as client work across all five groups became more tech-based, and therefore interrelated, over time.

The firm’s roots in Boston, home of many increasingly tech-driven finance and life sciences companies also made the convergence strategy a natural fit.

Goodwin benefited from hiring it had done as well, including a large group of lawyers from now-defunct, tech-focused law firm Testa Hurwitz & Thibeault in 2005. 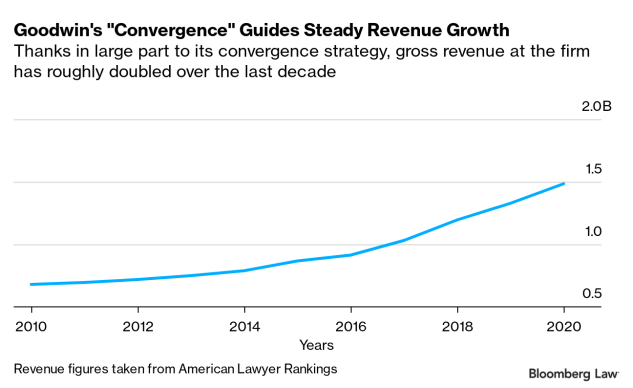 This convergence strategy also coincided with the massive influx of private money on transactions across all sectors, but specifically in technology and life sciences.

This influx has prompted firms’ increased performance and scale, but rather than try and compete across all sectors, some firms realized that the credible market position to take is to be a leader in certain sectors, sometimes even a niche at the intersection of a sector or sectors and certain practices or geographies, Zimmermann said.

“So, for example, what they do is they look where private equity intersects with a sector or multiple sectors, in which they have a lot of traction, and in which they are on the road to market leadership,” he said.

Goodwin has found its niches. For example, roughly 80% of the firm’s portfolio work in private equity is now technology companies, according to Chief Operating Officer Michael Caplan.

Over the last five years, Goodwin has brought on nearly 100 lateral partners, with an emphasis on tech, private equity, and life sciences. The firm has also jumped from eight offices to 13 worldwide in less than a decade.

“Based on strategic decisions in recent years, a handful of firms deserve credit for being tightly focused on aligning their investments in laterals and otherwise with advancing their strategy, pretty carefully staying in their lanes and moving the needle as result,” Zimmermann said.

The firm’s convergence focus gave it credibility when it launched in 2006 in Northern California, an environment where many non-native firms have had difficulties.

Firms with West Coast roots like Cooley, Fenwick & West, and Wilson Sonsini Goodrich & Rosati have historically had a tight grip on deal work in the region, especially among tech startups.

A 2019 report from startup consultancy Kruze Consulting showed Goodwin held 11% of startup client market share, ranking it in the top five law firms for emerging companies. It was the only non-native Californian firm in this group.

The firm represented longtime client Slack in the San Francisco-based company’s $27.7 billion sale to Salesforce.com Inc. and Brisbane, Calif.-based MyoKardia in its $13.1 billion sale to Bristol-Myers Squibb Co. The firm’s overall M&A work surged last year to 401 deals worth over $119 billion, up from 228 deals in 2019 worth roughly $60 billion, according to Bloomberg Law data.

Mitzi Chang, San Francisco-based co-chair of Goodwin’s fintech and digital currency and blockchain practices, said it’s the melding or convergence of the firm’s “old school” practices, such as its historic financial institutions and regulatory strength, and its “up and coming” tech companies work that differentiates Goodwin from others in Silicon Valley.

“It’s helpful when it comes to emerging technologies that are trying to change or disrupt the old financial regulations,” Chang said.

Goodwin now has well over 4,000 emerging company clients, many in tech and life sciences, differentiating itself by capturing business from early stages, through private investment, and then going public.

Since 2015, the firm has advised on 946 IPOs worth $125 billion, according to Bloomberg data, following only Latham & Watkins, Davis Polk & Wardwell, and Cooley in deal count. In 2020, Goodwin worked on 225 IPOs worth $41 billion, including advising the underwriters on data platform Snowflake Inc.’s $3.4 billion IPO, as well as the underwriters in DoorDash Inc.’s $3.4 billion IPO and Royalty Pharma PLC’s $2.2 billion IPO.

Among other Big Law firms focused on tech companies, Goodwin is really the “only firm is at scale in private equity, technology, life sciences in a life cycle practice,” said Anthony McCusker, co-chair of the firm’s technology group.

The life cycle concept also was the impetus behind the firm’s decision to open an office in 2019 in Cambridge, U.K., home to a large cluster of tech and life sciences companies.

The practice in Cambridge was launched not just around investors, but to represent tech startups to the point where they fell into the private equity world or public markets, said Gemma Roberts , a London-based Goodwin partner.

Calling its convergence strategy “jet fuel” for growth, Bettencourt said that in recent months Goodwin has enjoyed “a period of prolonged busyness, unprecedented in the firm’s 112-year history.”

The Covid-19 crisis and work from home era are widely expected to continue driving the surge in market interest around technology, as well as life sciences.