Sign up to myFT Daily Digest to be the first to know about Executive Pay news.

US firms’ cash-fuelled hunt for more bodies to throw into the front line of the late-pandemic deals boom is not just a talking point for Wall Street elites, however, or a lightning rod for equality campaigners’ indignation. It has implications for London’s “Magic Circle” law firms, and for the quality of the transactions and the quality of life of people doing them.

In June, Milbank, one elite US firm, set a new $200,000 salary benchmark for first-year associates. Rival Davis Polk & Wardwell immediately topped that and Milbank and other firms then matched the higher figure. Some firms are paying sign-on, referral, and retention bonuses, which can reach up to $250,000 for mid-career lawyers.

Bruce MacEwen of Adam Smith Esq, a boutique management consultancy for law firms, likens the bonuses to “combat pay”. As a proportion of revenue produced, or divided by the many hours firms expect new recruits to work, the payments are neither irrational nor particularly obscene, at least by the standards of Wall Street or City professionals.

The law school class of 2022, with one more year of study ahead, are receiving employers’ offers now. One US student who has chosen not to pursue corporate law estimates at least two-thirds of his class will. “The money is pretty blinding, other friends are doing it, and a lot of their professors took the same route,” he told me.

If they study at a leading school, firms come to interview them on campus and ease the final-year stress with a job guarantee. The salary goes some way to paying down student debt or buying a first home. Student lawyers know they will have to work harder than they ever have done, but plan to quit once they achieve that goal. Assuming, that is, they are able and willing to unlock their golden handcuffs.

This is a Faustian bargain, MacEwen says, and not only because of the punishing hours new lawyers are expected to put in. When deal activity subsides, partners will look to cut fixed costs by ditching high-paid junior staff.

The devil’s agent is also at the table for the trade-offs made by the firms themselves. “Everybody doing M&A is flat out and everything is happening in huge volumes, with a lot of speed, as if tomorrow doesn’t exist,” says Dana Denis-Smith, founder of Obelisk Support, which supplies legal services. Some deals that would normally take three months are completing in three weeks, increasing the risk of burnout and of costly mistakes. Remote working, which strips away the camaraderie that offsets some of the pressure, leads to more attrition, and higher retention costs. It sounds more vicious circle than Magic Circle.

Veterans will shrug that this has always been the trade-off for corporate lawyers. The rewards for those that stick to the course are richer than ever. In the UK, equity partners at large firms such as Clifford Chance and Allen & Overy have drawn down an average of nearly £2m each over the past year thanks to merger and initial public offering activity. No wonder they do not mind increasing recruits’ salaries to compete with the US firms.

But the core pool of ambitious young lawyers who simply ask “Where do I sign?”, irrespective of the workload, may be dwindling. According to Denis-Smith, the punishing regime is pushing women out of big firms, and in some cases out of the profession altogether.

What could break this cycle? Automation could take away some of the grunt-work, but not all firms are as advanced as they should be.

It might also help if corporate clients walked their incessant talk about work-life balance when it came to staffing the deals they want to do. Yet a survey by Thomson Reuters, for its customers, shows 61 per cent of US lawyers believe they need to be available at any time. As for limiting out-of-hours contact, only 37 per cent feel able even to discuss the possibility with all or most clients.

“The focus of US clients has been: ‘Get my bloody deal done’ rather than the cost of getting it done,” says Tony Williams, a former managing partner of Clifford Chance and now a principal at Jomati, a consultancy.

MacEwen suggests paying more to senior associates, the “platoon lieutenants” who bring three or more years’ experience to bear on deals. When the current M&A tide ebbs, firms could also consider broadening incentives to include training and development in business and finance. That would prepare associates for longer careers and cement their affinity with their old firm if they leave.

In other words, instead of torturing the old equation of billable hours, client fees, and pay, law firm leaders need to exercise longer-term vision. Some are, but I don’t hold out great hope. After all, students are not the only ones easily blinded by the money.

Lawyers Go to Austin, Texas for Business, Stay for the Lifestyle 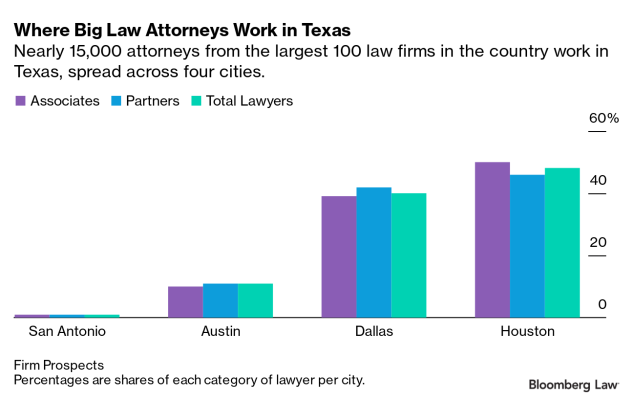